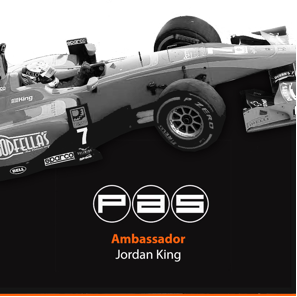 British racer Jordan King has announced a new partnership with Pro Athlete Supplementation (PAS), as he heads into his second GP2 season with Racing Engineering.

Leading the way in performance nutrition in professional sport, PAS supplies informed sport batch-tested products to elite athletes & teams. Competitors need to pay close attention to their fitness to perform at their peak in any sport and motorsport is no exception, making PAS an ideal fit for the 21-year-old Warwickshire driver.

King, who finished 10th equal – and among the top few rookie drivers – in 2015, said of the partnership:

“As a driver I have to cope with extreme forces and temperatures, so keeping my wellbeing and fitness high is vital. Getting my nutrition right is a key part of this, enabling me to not only perform under these conditions, but also recover quickly between races.

“I am excited to be working with PAS at such an important time in my career and am looking forward to the 2016 season.”