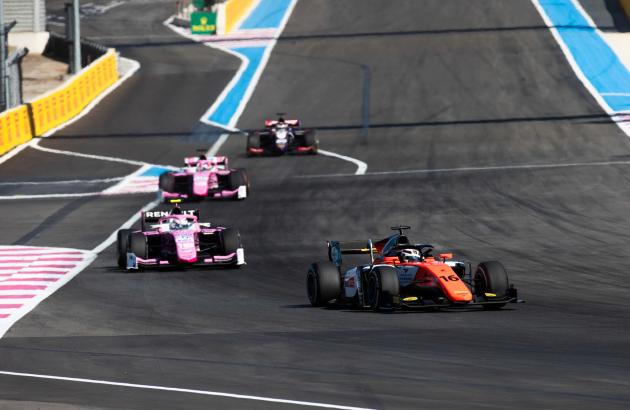 Jordan King demonstrated a masterclass in overtaking on his return to the 2019 FIA Formula 2 season, manoeuvring his way from P16 to sixth position in the Feature Race at Paul Ricard. However, a lack of straight line speed saw Jordan miss out on the top-10 in Sunday’s Sprint Race.

The 25-year-old was forced to miss the last F2 round at Monaco, due to competing in the Indianapolis 500. Nonetheless, despite a hectic schedule, in which Jordan raced in America and at the 24 Hours of Le Mans since his last F2 race, Jordan was able to deliver an excellent performance to pick up more championship points in a frenetic feature race at Le Castellet.

The weekend got off to a tricky start for Jordan – practice saw a time quick enough for only 17th fastest, and it was much the same for qualifying, with Jordan setting a time of 1:44.882s to put him 16th on the grid for the Feature Race.

The Feature Race in France presented a completely different story for the Warwick-born driver. The Brit got off to a flying start and MP Motorsport played the long game with Jordan’s strategy, meaning he led the field in the second half of the race. When the time came to pit for fresh tyres, Jordan re-joined the running order in seventh. Not quite content with that result, he put his fresh rubber to good use and performed an excellent overtake on Luca Ghiotto to put him sixth.

For Sunday’s Sprint Race, Jordan started from P3 on the second row of the grid. Unfortunately, this race proved to be much more difficult as Jordan suffered with his straight-line speed. Making a strong start off the line, Jordan then ran wide at the first corner, which caused him to take the escape route. Despite recovering well, Jordan continued to drop down the order and he crossed the line just outside the top-10 in 11th position.

“The feature race was really positive and there are lots of good points to take away from that,” Jordan said. “The weekend had got off to a bit of a tricky start in terms of our pace, but we kept striving and that came in the first race. It was good to score some more points and to keep on adding to my tally!

“The sprint race was more difficult. I got a great start off the line but had to go wide so that hindered my progress a bit. From there, it was about defending from behind but I was lacking straight-line speed.”

Back-to-back race weekends sees Jordan back in the car this week for the next FIA Formula 2 outing at the Red Bull Ring, Austria.