Jordan King will make his debut in the historic Indianapolis 500 on Sunday, after qualifying 26th on the grid. Ahead of the 103rd running of the event, here’s a handy guide to get you acquainted with one of the fastest racing events on the motorsport calendar.

What: A 500-mile endurance race lasting upwards of three hours 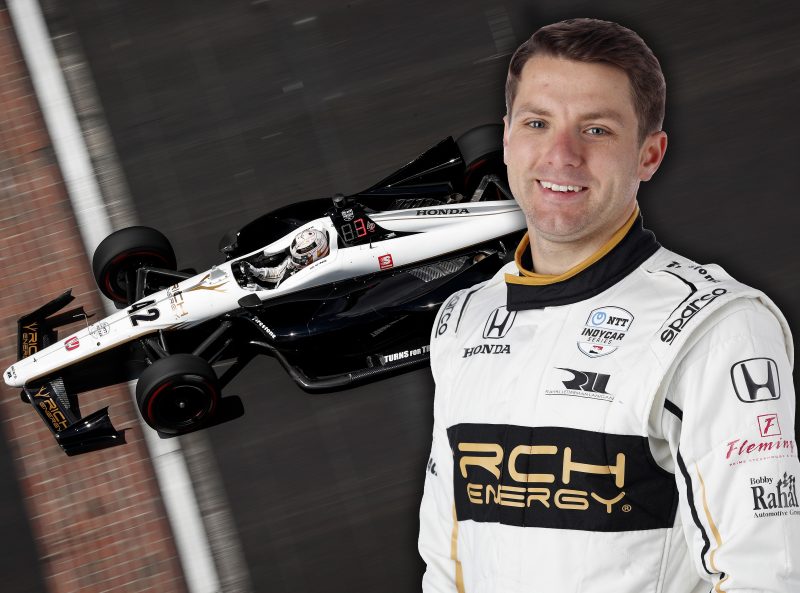 With a total of 36 drivers aiming to make the starting grid, Jordan was part of the top-30 drivers that made it through Saturday’s qualifying and guaranteed his spot in the 2019 Indianapolis 500.

Jordan was able to avoid the so-called bump day, where only the three quickest drivers of the final six made the cut to form the 33-car grid with the other three being sent home.

The qualifying results are depicted by the average speed across four laps – these are driven consecutively and the four average speeds are collated to give you your final miles per hour median.

Jordan completed three timed runs, after his first attempt was aborted due to debris being left on the track by the previous runner. IndyCar rules state that you are able to have as many runs as you wish – although this is time permitting.

Jordan’s fourth and final run – with an average of 227.502mph – allowed him to start Sunday’s race from 26th on the grid.

The final, hour-long, practice before the Indy 500 will take place this Friday on what is known as ‘Carb Day’ on Friday, May 24.

The race on Sunday will get underway at 17:45 UK time, and from there it’ll be a 500-mile sprint to the finish line – the first driver to complete the mammoth distance wins.

Jordan – who is one of four British drivers in this year’s race – will start from row number nine, with three drivers on each row. This makes for a thrilling start as the cars fight for position off the line at the rolling start.

In the past the races have been notoriously dramatic and unpredictable, providing upwards of three hours of nail-biting drama from lights to flag around the 2.5-mile circuit often referred to as the Brickyard.

The name the ‘Brickyard’ originates from when the circuit was first completed and the surface was made up of bricks – hence its nickname. Now, the only mark of the original track that is still left is the strip of bricks on the start/finish line.

In addition to the overall podium, there’ll be an award for the best performing rookie over the event.

The award is voted on by a panel of judges, which is composed of selected members of the media, historians, and a handful of other experts. The voting takes place the night of the race and does not necessarily go to the highest-finishing rookie. Noteworthy accomplishments during qualifying, regardless of the respective race result, have frequently been a factor in voting.

In the past, there have been 10 rookies who’ve stormed to victory on their Indy500 debut. The latest newcomer to win was Alexander Rossi in 2016.

This year, there will be six rookies – including Jordan – who will start the race and who will be in competition with Jordan for the Rookie of the Year honours.

The Pit Stops and Crew

On average at the Indy 500 there are seven pit stops and pit stops in IndyCar are rather different to what you would get in a Formula One race. At the 500, only six members of team crew are allowed over the wall – as opposed to the 12-man crew you’d get servicing an F1 car.

During a standard pit stop, the crew typically change the four Firestone tyres, add about 18.5 gallons of fuel and make any necessary adjustments to the bodywork. This is all completed in under 10 seconds.

In addition to the pit stop crew, each driver has a spotter in a designated spotter’s grandstand. This individual will warn the driver of any cars in their blind spots, as well as suggesting when to make a potential overtake.

This may sound slightly strange, but with the driver pushing a constant 200mph, the spotter not only plays a vital safety role but also becomes a vital part of the race strategy.

“I’m extremely excited for my first ever race at the Indianapolis 500. This will be my first oval race and it is definitely the biggest event I have ever competed in. I was slowly building my confidence up last week and slowly pushing a bit more every time I went out.

“Qualifying was a unique experience as the added pressure going out one by one really means you need to focus and channel in on your driving. We all saw how close qualifying was and that anybody can miss out on qualifying for the race.

“Now that the race is finally here, there’s no more time for building up confidence, when the flag drops on Sunday I’m going to need to be at my best and be pushing the car to the limit for 500-miles. Anything can happen in the Indy 500 so the aim is to be in it for the duration as you need to be in it to win it!”

The race on Sunday will mark Jordan’s first competitive oval event – with the odds on him to win at 250\1. During the practice sessions, he remarked how he’d now gone faster on land than ever before.

As the lights go out on Sunday, it’ll be all to play for in front of some 250,000 spectators – the most of any single day sporting event. In the words of Alice Greene, get ready for the greatest spectacle in racing.

The Indianapolis 500 will be live on Sky Sports F1 from 16:30 with build-up and full race coverage, with the start of the iconic race at 17:45