Jordan King stars on his Indycar debut despite a disappointing result

Jordan King made headlines on his Indycar debut as the young Brit broke the St. Petersburg track record in qualifying and led the Firestone Grand Prix of St. Petersburg before a puncture ruined his chances of a positive result in Florida.

Heading to St. Petersburg, Florida, for his first-ever Verizon Indycar Series weekend, Jordan headed to the 1.8-mile circuit feeling positive that he could impress on his maiden weekend. Jordan’s first session got off to a bright start as he quickly got up to speed with the demanding 14-turn street circuit and finished the first track action of the weekend in a highly respectable 11th, just six-tenths off the fastest driver, Matheus Leist.

Friday’s second session saw times drop as the track evolved and drivers gained more confidence behind the wheel. Jordan shaved almost a second off his morning time and finished practice two in 14th place with a lap time of 1:01.5579.

After his first full-day in an Indy car elapsed, the Ed Carpenter Racing driver was happy with his progress and looked forward to continuing his development.

“There’s not too many dissimilarities between this car and the ones I used to drive (Formula 2, 2015-2017). There is a lot of crossover, which has made it a lot easier to jump in and drive the car. However, there’s so much to learn procedurally. I have to learn the circuits, the way the tires behave, the way the mechanics work. So there’s a lot more going on than just driving the car.”

“I’ve not driven any of these circuits before, so it will be a new experience each weekend. There’s always going to be learning, right up until the end of the season. I do feel comfortable within the car and driving it, which is a positive because the goal is to be as comfortable as possible as quickly as possible.”

Jordan continued to improve as the weekend rolled into Saturday, with the final practice session before qualifications taking place in the morning. Jordan shone in the morning session as he put together a 1:01.0321 lap time to secure 4th place on the timing sheets before a late lockup saw him kiss the tyre wall at the final corner to bring out the red flags and draw an end to third practice. Despite the late lockup in practice, Jordan’s confidence was not hampered as he headed into the first round of qualifying looking to make an impression.

Drivers were assigned qualifying groups based on times from the preceding practice. King was assigned to Group 1 and started the 10-minute session on a set of scuffed black Firestone Firehawks. After three laps, he came into the pits for a new set of the softer, yet faster red tyres. On his 5th lap, he shot to the top of the scoring sheet with a lap time of 1:00.0476 (107.914 miles per hour). That lap broke Will Power’s previous record from 2016, making King the new track record holder for the Streets of St. Petersburg.

After the first round, rain began to fall in St. Petersburg and King started Round 2 on a set of scuffed red tyres. His first lap up to speed on the reds had him sitting in the third position, then stopped for a set of sticker reds. After one lap on the new set of tyres, he elected to come back into the pits as the track was becoming quite slick. His lap held and he would advance to the Firestone Fast 6 in his first-ever Verizon IndyCar Series qualifying session. King’s Firestone Fast 6 appearance was the first for ECR since Mid-Ohio in 2016 and the first for the No. 20 since Toronto in 2015.

The Firestone Fast 6 featured a six-minute segment with the fastest six drivers of qualifying. Because King had already turned laps on both of his sets of sticker reds, he ran the session on a set of scuffed reds. His fifth and final lap was his fastest at 1:01.7633 (104.917 miles per hour), landing him the fourth starting position for tomorrow’s 110-lap race.

Jordan was delighted with his qualifying performance but believed he could have grabbed pole position had he pushed harder at turn ten.

“It’s good, but I still think we should have been a bit quicker! It was quite slippery at Turn 1, but I found quite a good way around there. Actually, at the back of the circuit, it was reasonably quite dry. Unfortunately, I almost went off at Turn 10 on my first push lap, so I came into there on my last lap a little bit tentative and looking at the times, that was the difference. But 4th, I can’t complain!”

Delighted with his job in qualifying, Jordan remained level-headed and tried not to put too much expectation on his first-ever race.

“I’m really happy. It’s all gone well, we’ve made some pretty good progress for my first time so I can’t grumble too much, but when there was potential to be a bit higher up, you can’t help as a racing driver but to want a bit more! I’m trying not to put too much expectation on tomorrow, we’ve got a good car, if I do my job I’m sure the rest of it will unfold quite nicely.”

After setting the track record and qualifying in 4th place, Jordan started the Firestone Grand Prix of St. Petersburg from the outside of the second row, and at the rolling start, got a good start and looked to the inside of third-place Matheus Leist but thought better of it and yielded the position – slotting in behind through turn one.

Turn two saw drama as Will Power lost control of his Chevrolet and he spun from second-place, allowing Jordan to move up the order to third-place. Jordan’s pace out of the gates saw the 24-year old bring the fight to Matheus Leist and by the end of the second lap, the Indycar rookie had passed the Brazilian to move up into second place!

The race slowed by the first full course caution on Lap 3 for two laps and on the Lap 5 restart, King executed a textbook restart and gained momentum on Robert Wickens heading down into turn one. As Wickens took to the inside, Jordan went wide and passed around the outside of the pole sitter, taking the lead of his first Verizon IndyCar Series race. On the next lap, Graham Rahal dove to the inside of Jordan’s ECR teammate, Spencer Pigot, going into Turn 1 and the two made contact. Pigot was spun and stalled, bringing out the second full-course caution.

King led the field to the green flag on the Lap 10 restart. However, Wickens was able to regain the lead when King went slightly wide at turn one, dropping King to second. Jordan then lost out to Alexander Rossi as he was able to work his way around King but the Brit recovered and maintained the third position, building a 3.8-second gap over fourth place.

When Jordan came in for his first pit stop on Lap 24, he was running 2nd and after a few laps, another full course caution came on Lap 28, lasting for four laps while the stopped car of Matheus Leist was removed from the track after he made contact with the wall.

Coming to the ensuing restart, King was running 8th but appeared to have a puncture. Before the team was able to determine if it was a leak or if a tire pressure sensor had failed, the restart occurred on Lap 33 and King’s tyre immediately went down. The car got away from King and he brushed the wall with the outside rear, bending a piece of the suspension. The No. 20 Fuzzy’s Vodka crew immediately completed the necessary repairs and King rejoined the race, albeit three laps behind the leaders – and theoretically ending his race.

Falling back to 22nd and three-laps down, Jordan endured the rest of the race hoping for a miracle to change his race but the Brit had to settle for 21st on his Indy car debut after showing real promise before his early puncture.

Jordan was disappointed to end his maiden race in such fashion but remained positive after leading his first race and showing great pace.

“On the positive, I led my first Indy car race. It is nice to be able to say that! I am reserved, so I didn’t actually do it, but I did have a little bit of a mental fist pump in my mind when we took the lead. The speed was really good during the race, we genuinely had the pace to challenge for the race win. After the first stop, we picked up a puncture and slid against the wall and had some damage. It was frustrating more than anything to be hindered by that.”

“Overall, I am happy from the sense that the speed is there, but disappointed to throw away a result. I know not every weekend is going to be like this, but it was great to be fast and challenging for the race win. It just hurts a bit when you throw away a good result like that!”

Jordan now hands the No. 20 car over to team owner, Ed Carpenter, for the first oval round of the season at ISM Raceway (formerly Phoenix International Raceway) on April 7th. Jordan’s next round back in the No. 20 is the Toyota Grand Prix of Long Beach on April 15th! 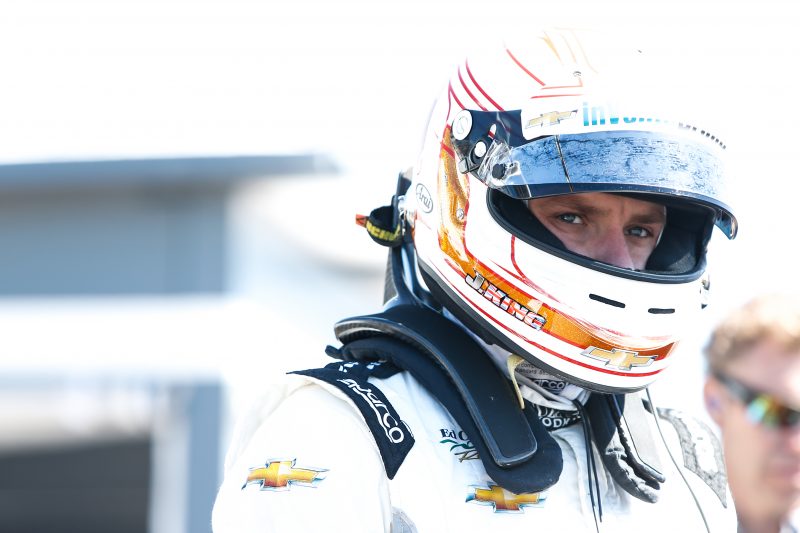