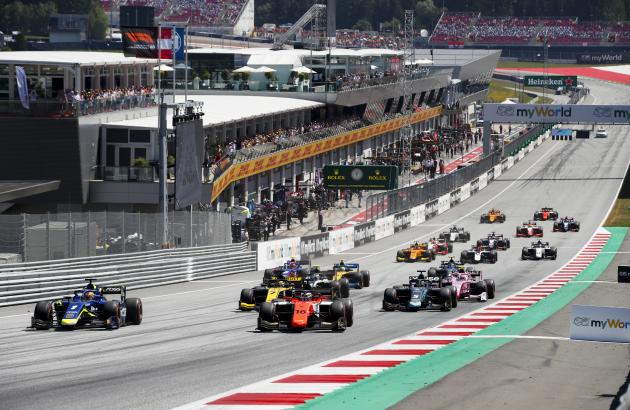 Jordan King collected points in both of the weekend’s race in Austria as he delivered yet another strategic and overtaking masterclass in a Feature Race, finishing in 8th position having started from 15th. Jordan then lined up on pole position for Sunday’s race but could only manage a 7th place finish as he suffered from tyre degradation.

Having picked up points in the previous round in France, Jordan headed to Austria for back-to-back race weekends, hoping to pick up more points, this time in the mountains at the Red Bull Ring.

With air temperature at 30 degrees when qualifying began in Austria, Jordan began his weekend on the super soft compound tyres, with the fastest lap of his first stint placing him in fifteenth.

Coming into the pits for a new set of super softs, the second run saw Jordan improve on his time, recording a 1:15.139, however despite the improvement in lap time, Jordan was unable to improve on his position and secured a fifteenth starting place for Saturday’s Feature Race.

Lining up in fifteenth, Jordan made a sensational start off the line, gaining five positions as he headed out of turn one in tenth position. Starting the race with the softer compound of two tyres, Jordan began to struggle and he fell back two places, before going in for an early pitstop on lap seven.

Showing strong pace around the midway point of the race on the harder compound, Jordan was lapping 0.2 seconds away from the fastest lap of the race and was closing the gap to Sérgio Sette Câmara. Inside the DRS zone, Jordan used the slipstream to pass the Brazilian but later yielded a position to Guanya Zhou on the 29th lap – leaving Jordan running just inside the top-ten.

A few laps later Jordan then overtook compatriot Callum Ilott for 9th place, and when Mazepin made his obligatory pit stop, Jordan was able to maintain his 8th position until the finishing line – securing more championship points whilst also being the biggest mover of the day as he gained seven places in the Feature Race.

The result also meant that Jordan would line the grid from pole position for Sunday’s Sprint Race.

Making a strong start off the line from pole, Jordan continued to lead the race for the opening two laps but the pressure began to rise from behind as Nick De Vries battled him for position. Losing the lead but quickly regaining it, Jordan then came under pressure from Louis Deletraz who snatched the lead of the race and demoted Jordan to second.

Jordan did extremely well to remain in second position, but soon his tyres would again start to suffer and as a result his lap times also. During this time, Jordan lost four positions and was running in 6th position as he and Mick Schumacher had a titanic battle for the position – with Jordan eventually conceding the place after two laps of wheel-to-wheel racing.

Deletraz then crashed heavily, bringing out the safety car and promoting Jordan back to 6th position, and after the safety car went back in Jordan kept his race clean and bought the car home in seventh position to finish the race in the points again.

After scoring points in both races at the Red Bull Ring, Jordan now sits on 40 points and remains in 10th position in the championship standings.

“Overall, it was a relatively positive weekend for us after scoring points on the back of a difficult qualifying. The Feature Race was a lot of fun, and we did well to make up so many positions and work our way through the field. So we can be pleased with that.

“To be sitting on pole for Sprint Race was great, but unfortunately it didn’t end in the fashion that we would’ve liked. I managed to keep the lead for the first few laps but we couldn’t maintain the pace on the tyres through the race.

We know where we need to improve and we’ll all be working hard before my home race at Silverstone as I’d love to have a successful weekend on my home turf!”

The F2 circuit will now take a two-week break, before heading to the home of British Motorsport at Silverstone on 12th-14th July.