More points for King in Barcelona

Jordan King continued his Formula Two campaign in Barcelona with another haul of points in both the Feature and Sprint Races.

Following a star performance with a podium in Baku, Jordan returned to the track at the Circuit de Barcelona-Catalunya in Spain for the third round of competition supporting the Formula One calendar.

The following afternoon’s race provided an excellent comeback for the British driver. The event provided a chaotic start, with a number of small incidents enabling Jordan, who started on the harder compound tyre, to capitalise and climb three places to 13th in the order.

With the pit-stop window open, MP Motorsport decided to keep Jordan out and play the long game. This strategy allowed him to run in the top three, with an overtake on Ralph Boschung completed just before Jordan came in for a new set of soft tyres.

Jordan rejoined the field in 11th, and worked hard to rise through the ranks. With the Brit now on the faster soft tyre, Jordan was able to put together a brilliant final stint in the closing laps to overtake four drivers to finish seventh. This result meant that Jordan lined up on the front row of the grid for Sunday’s Sprint Race. Jordan was also able to set the fastest lap of the race on lap 35, proving his impressive race pace once again. 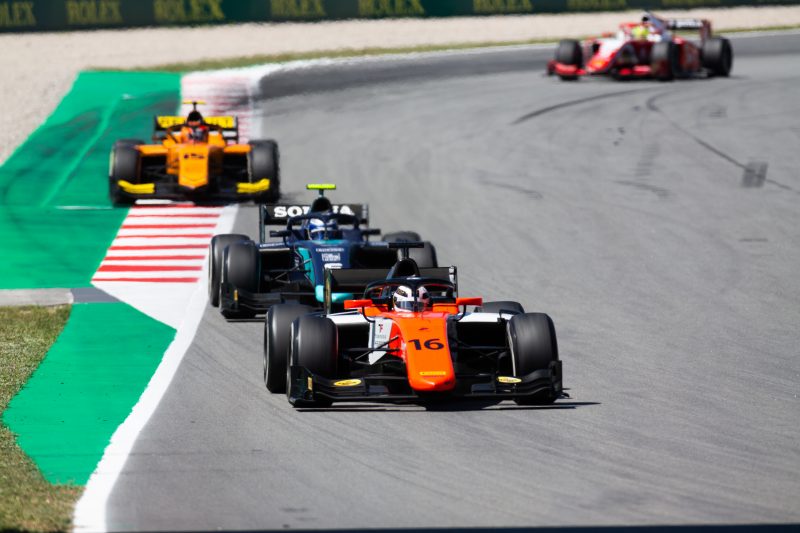 The Sunday Sprint Race proved to be thrilling for the 25-year-old, with battles throughout the 26-lap event. The Brit lined-up second on the grid after his strong Feature Race result, with the target of scoring more championship points.

With an unideal getaway from the line, Jordan fell back to fourth as the second row jumped the first row on the run down to turn one. The race was then paused when the safety car was deployed for a fire that had engulfed Nobuharu Matsushita’s Carlin, and Jordan had to sit tight for the restart.

As the safety car ended, Jordan defended well to keep his fourth position. With DRS enabled, Jordan was narrowly outside of the one-second window to attack for third position. Guanyu Zhou, however, was in DRS range and he was able to pass Jordan down the main straight on lap nine.

Jordan then fell behind the fast-moving Luca Ghiotta but on lap 15 did well to fend off a charging Jack Aitken, who attempted an optimistic move around the outside of Jordan into turn one but Jordan shut the door and kept the Campos Racing driver firmly behind for the rest of the race.

Jordan held his nerve and a second seventh place of the weekend was earnt. With a total of 27 points, Jordan now sits eighth in the championship standings. 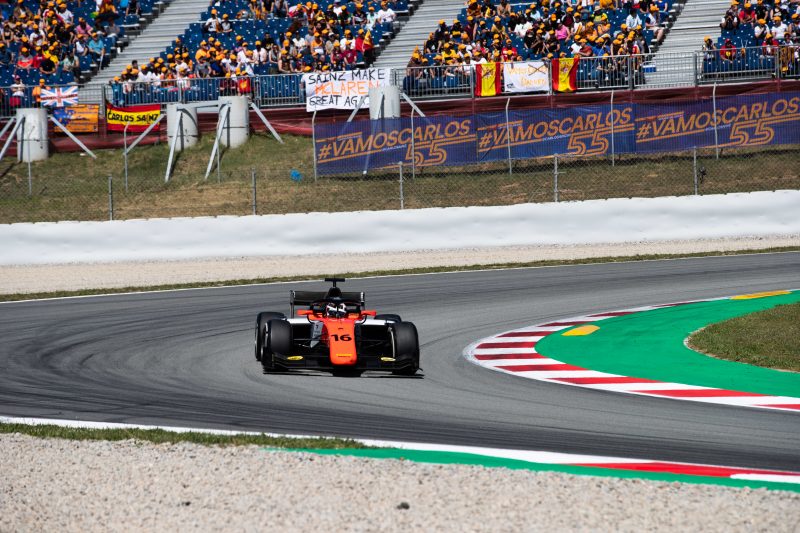 “On the back of a podium in Baku, I was looking forward to seeing what we could achieve in Barcelona. Qualifying was disappointing as we were lacking outright pace, and 16th was the best we could do. This meant I had to work hard in both races to make sure we collect points.”

“Starting towards the back for the Feature Race, I managed to work my way up to seventh in what was an eventful afternoon. I pushed hard in the final part of the race, and was able to put in a solid performance to finish with some points in the bag. I started on the slower tyre, so was able to do a longer-run on my first stint before switching to the soft. That tyre worked well for me and I was able to get back into the top 10.

“Starting on the front row for the Sprint Race, I didn’t finish where I wanted to. We were lacking pace and this made it tough to stay in front. However, we added a few more points to the tally which is always a good thing for the championship and the team.”

Due to Jordan’s Indy 500 commitments, he will miss the next round in Monaco. He will return to the grid for France which will take place from 21-23rd June.