Podium and double points for King in Monza

Jordan King returned to the FIA Formula Two podium in Monza as the MP Motorsport driver improved on his 6th place in Saturday’s Feature Race to end the weekend with silverware after an impressive 2nd place finish. 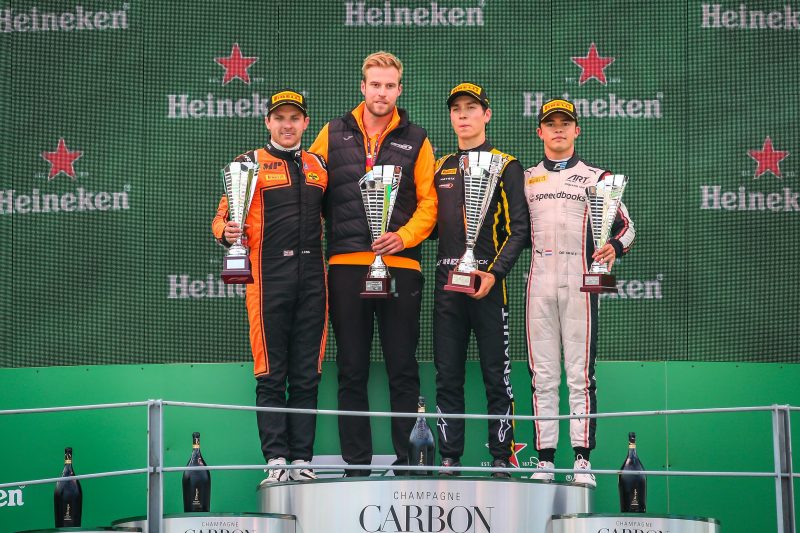 Following the previous round’s tragic events, Jordan and the F2 paddock returned to racing with heavy hearts as they paid tribute to Anthoine Hubert and Juan Manuel Correa – who is currently hospitalised and in a critical but stable condition.

Starting the weekend with free practice on Friday, Jordan got up to speed with the 3.6-mile circuit in dry conditions and finished the first running of the weekend in 14th place. Fine-tuning the car before qualifying, Jordan headed out for the weekend’s qualifying session that saw rain on and off throughout – making it very tricky to find the right time to set a lap time.

Running just outside the top-ten in eleventh place after the first runs, the session was briefly paused by two red flags and as the session went green, a light rain shower put a halt on any improvements in time.

As the rain stopped, and the track dried, Jordan saved his best till last and was the only driver in the field to improve on his time in the final runs as he qualified in 7th place with his last lap of the session.

Starting the race from the 4th row of the grid on the harder compound, Jordan got a good start off the line and was able to move up to 6th place at turn one. Keeping pace with the cars ahead on the softer tyre, on lap six the first cars began to pit and Jordan was able to move up the order as he ran long on the more durable tyre.

Eventually pitting from the lead of the race on lap 21, as the last of the cars to stop, Jordan returned to the race in 7th place and was five seconds behind Sean Gelael as the race drew closer to its conclusion.

Benefitting from fresher, quicker tyres, Jordan passed Gelael with four laps remaining to move himself up to 6th place – from where he took the chequered flag. His Feature Race result meant that he secured a 3rd place starting position for the final race of the weekend.

Getting the 21-lap Sprint Race underway from the second row, Jordan got a fantastic start off the line and managed to squeeze his way into second place at the tight turn-one chicane.

Locked into a tight battle with leader Jack Aitken, Jordan launched his attack on lap seven as he swept around the outside of Aitken at turn three and secured the inside line for the second chicane and took the lead of the race.

Beginning to pull away, the race was paused by the Virtual Safety Car to recover a stricken car. Running to the VSC delta, Jordan was running through the Parabolica as the VSC ended and lost out to Aitken who was carrying higher speed at the time of the restart. Passed on the home straight, Jordan was back in second but continued the fight.

Hoping to replicate his pass from earlier in the race, Jordan got down the inside of Aitken a few laps later but carried a little too much speed and the pair had to take avoiding action. This allowed Ilott to pass Jordan as Aitken remained as the race leader.

Heading into the final lap in third place, Jordan was able to capitalise on an Ilott mistake and got back into second place, from where he crossed the finishing line to record his second podium of the season and his best result of the year.

“Overall, it was a strong weekend for myself and the team. We managed to get both cars in the points on Saturday, which is really positive, but I felt I could have finished a little higher than sixth.

The Sprint Race was really positive, I got a good start and managed to challenge Jack (Aitken) the whole race which highlights that we have the pace to win races. It was hard to get too close to him, as he defended hard, but managed to get past and pulled away quite quickly.

When the Virtual Safety Car came out, that really hindered our race. At the restart, it was the wrong place for us, the right place for the car behind. I’m happy to come away with second, so can’t cry too much, and I’m really happy for the team as the guys have put in a lot of effort this weekend.”

Jordan now moves into 8th place with 79 points as the championship heads to Sochi, Russia, for the penultimate race weekend of the season (27th – 29th September).