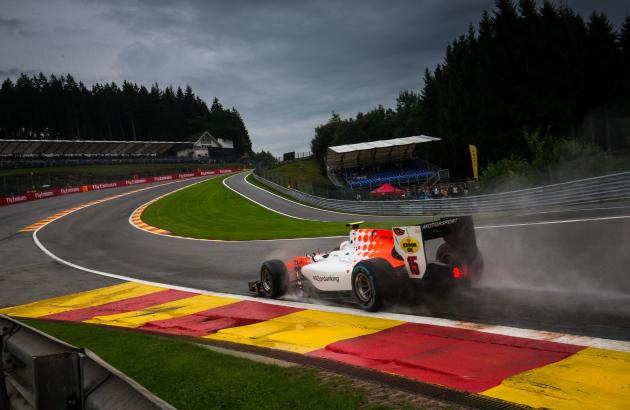 The eighth round of the FIA Formula 2 season proved a frustrating one for Jordan King who, despite blistering starts and fantastic overtakes, had to settle for a non-scoring weekend.

Drawing an end to the summer break and commencing the final run of rounds of the season, Spa-Francorchamps is usually a happy hunting ground for the 23-year old since taking podium finishes on his previous two visits to the track in the Formula One feeder series.

Practice commenced the first session of the weekend in Belgium and Jordan’s struggles in his MP Motorsport car were clear to see as he struggled to put a competitive lap time together – finishing 18thplace with a 1:58.881 lap time.

Typical Spa weather saw free practice’s sunshine replaced with heavy rainfall in the heart of the Belgian Ardennes, setting the scene for a dramatic qualifying. With rain falling on and off throughout the session and a red flag being brought out for Sergio Sette Camara’s spin, finding a perfect lap at the perfect time was a difficult task.  With a 2:24.127 lap time, Jordan was only able to secure a 16th place start for Saturday’s feature race.

Saturday’s feature race in Spa saw the sunshine return and conditions looked perfect for racing in Belgium. Starting way down in 16th, when the lights went out for the start of the race, Jordan got off to an absolute flyer with one of the best starts of the season from any driver. Shooting up the order, Jordan moved himself to just outside the top-ten having passed several cars before the first corner.

Avoiding contact through the tight turn one, it was on the run down to Eau Rouge where Jordan’s race came to end. Jordan was struck by another driver and this resulted in his MP Motorsport car picking up a puncture.

The puncture left Jordan with damage to his car and meant that he couldn’t continue the race and was forced to retire before he had even completed the first lap.

“Today was a very frustrating day, I got off the line really well with one of my best ever starts. Unfortunately for me, my race only lasted a few hundred metres before I picked up a puncture and it was game over!”

Lining up in 17th place for Sunday’s sprint race, Jordan got another great start and had to take to the grass to get around the slow-moving Sean Gelael. Making his way up the order rapidly, Jordan took to the inside at La Source and despite being extremely close to other drivers, safely negotiated the first corner and made his way down to Eau Rouge.

Keeping his position down the Kemmel Straight and through Le Combes, Jordan pulled off a sensational move around the outside of Nicolas Latifi to move himself further up the order and by the time he was half way through his first lap – Jordan was up to 13th place.

Driving with real determination, Jordan again went on the offensive and this time on Nobuharu Matsushita. Getting a great run down the Kemmel Straight, Jordan pulled out of the slipstream and took to the harder outside line. Later on the brakes, Jordan was squeezed right to the edge but managed to swoop around the outside of Matsushita and kept it within the white lines to complete another fantastic move.

Stuck in a trail of cars, Jordan’s progress stalled and he and the team opted for a change of strategy. Pitting just after the midway point, Jordan put on a fresh set of option tires and rejoined the action way down at the back of the field. On fresh rubber, Jordan begun setting the fastest laps of the race and was soon lapping three seconds quicker than the rest of the field.

Looking like he could easily break into the top-ten, Jordan eventually made his way up to 14th place but his progress was halted after Matsushita’s heavy crash on the 15th lap of the race. This brought out the safety car for the remainder of the race which ended Jordan’s hopes of making up anymore ground.

“I had good fun out on track today and pulled off some good moves that I’m really happy with. We tried a risky strategy today that seemed to look like it was going to pay off as my times were looking really quick. Unfortunately, Nobu had his accident, which I’m glad to hear he’s okay after, and this cost us any chance of points as the race finished under safety car.”

10th in the championship with 49 points, next up for Jordan is a quick trip over to Italy for the ninth round of the season at Monza this weekend (1st – 3rd September).