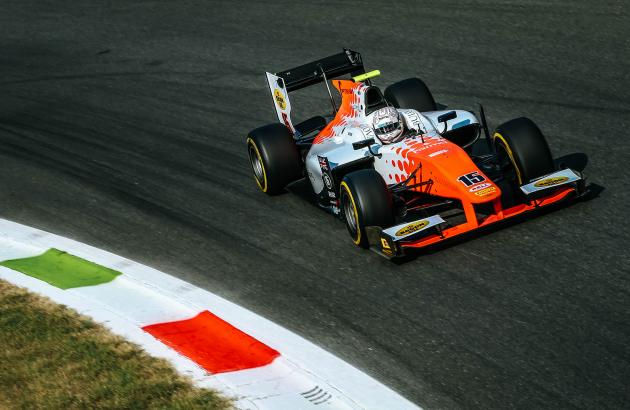 Jordan King endured another tough weekend in the 2017 FIA Formula 2 season as an error in the Feature Race at Monza, Italy, made scoring a point all the more strenuous.

The weekend started positively for Jordan King, who sat in 10thposition in the Drivers’ Championship heading into the weekend, as he finished the first practice session at the ‘Temple of Speed’ in 6thplace and half a second off fastest man, Artem Markelov.

With just one second separating the top-sixteen places in the practice session, qualifying was going to be a tight affair and when the light went green for the thirty-minute session, Jordan was straight out to record a time.

As the session hit crunch time, Nabil Jeffri spun with six minutes on the clock, bringing out the red flag and sending everyone back to the pits. As the flags waved green for the conclusion of qualifying, the track was hectic as drivers fought for track position and tried to find enough space to put in a flying lap. A lap time of 1:31.355 minutes secured Jordan a 6th place start for the Feature Race in Monza.

Saturday’s Feature Race at Monza was delayed by over an hour due to heavy rain delaying the Formula One qualifying. With the track still soaking wet and wet’s being the choice of tyre, action at Monza finally got underway but not how Jordan would have liked it.

Jordan’s initial get away from his grid slot was fine but as he engaged the second clutch, he stalled the engine and lost power as the rest of the grid raced past him in the cloud of spray. Luckily, Jordan avoided being struck from behind and was finally able to get his car going again but faced a big rescue mission.

Spending the majority of the race at the back of the pack, Jordan’s pace in the wet was phenomenal as he tried his best to catch up with the rest of the field and with only a few laps remaining, Jordan was given his opportunity. A safety car was brought out as Oliver Rowland’s tyre came loose after his pitstop and Jordan caught the pack at the Parabolica just as the safety car pulled in for the restart on the penultimate lap.

Starting the final two laps in 17th place, a crazy climax to the race saw Jordan utilise his outstanding pace to move himself up the order to cross the finishing line in 11th place – only to later be promoted to 10th place after post-race penalties were handed out.

Jordan reflected on a disappointing afternoon in Monza.

“My start was a disaster and cost me a good result today. The first 20 metres were great but then I stalled and that made my day a lot harder! The pace was so good making my way up the order in the wet, so I’m rueing the missed opportunity today.”

Starting in 10th place for Sunday’s Sprint Race, Jordan got off the line well and held the inside line heading into turn one, forcing Norman Nato to back out of his attempt to dive down the inside.

A frantic opening lap saw Jordan fighting for position for the entirety of the lap and heading down the back straight, the Brit made a move on Nobuharu Matsushita. Taking to the inside, the pair of drivers went side by side around the famous Parabolica and there was nothing between the two of them as they crossed the line for the first lap.

Racing at 200mph, Jordan and Matsushita stayed neck and neck into the first corner where Jordan commanded the inside line. Matsushita, however, outbraked himself and was forced to cut the first corner but didn’t yield the position to Jordan. Staying on the limit, Jordan caught back up to Matsushita and got past the Japanese driver into Lesmo-1.

With the pair of drivers trading places for the next few laps, Jordan eventually found himself in a train of cars, spanning from 7th down to 14th. Making a move became riskier as if you couldn’t make the move stick, you left yourself vulnerable from behind.

As the cars battled in front and behind, Jordan slowly took advantage and was making his way up the order when he was in a battle with Artem Markelov. With Markelov moving slowly out of the second chicane, Jordan saw a perfect opportunity to get himself up the order. Forced to the outside of Lesmo-1, Jordan was left with no room on the track and the pair of drivers touched wheels heading around Lesmo-1, punting Jordan off the track and into the gravel.

This contact saw Jordan drop out of the points paying positions and fall to the back of the field, where he recorded the fastest lap of the race for the second consectutive sprint race but was unable to pick up any championship points.

“Today was disappointing as I thought we had the pace to pick up points today. I was in a close battle with several drivers so it’s annoying for my race to end in that manner after points were within our grasp! It’s good to pick up another fastest lap but in the end, it was a weekend to forget and focus now switches to Jerez next month.”

Jordan returns to FIA Formula 2 duty next month for the penultimate, stand-alone event in Jerez (6th – 8th October). Jordan now drops down to 11th place in the Drivers’ Championship after only scoring the single point in Monza.